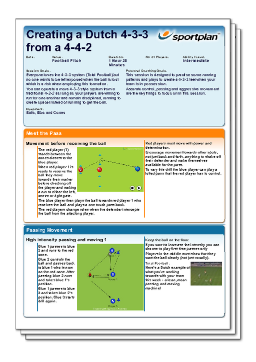 This session looks at how your team can play using the English 4-4-2 but with all the attacking threat and prowess of the Dutch 4-3-3 formation. To achieve this dual formation your players will need to have excellent running off the ball to create space; passing and moving to support the player on the ball, using overlapping runs to overtake your opponents.

First used by the victorious Brazilians in the 1962 World Cup in Chile, the 4-3-3 formation has continued to prove itself to be a system which is as attractive as it is effective. More recently used by the World champions, Spain, during the 2006 World Cup in Germany and currently employed by FC Barcelona the 4-3-3 is the Total Football formation of choice. Unlike the English 4-4-2, positions in the Dutch formation are less rigid and rely more on movement and support from your players, especially the wingmen.

To get your players moving more fluidly this session sees a lot of high intensity passing and moving drills, focusing firstly on getting the basics right before adding more and more defensive pressure. Not only will this get your players active, it will also encourage them to look for the ball and make darting runs forward, overlapping on the inside and the outside, to support the ball. Regardless of whether the player making the run gets the ball or not they will support the play by creating space and stretching the defender.

Finishing with a conditioned game your players will get the chance to put what they have learned into practice, playing strong and attractive football to devastating effect. This session is the whole attacking package. Aggressive running, accurate passing and sharp shooting.