The group is split into 2 teams. Each teams lines up opposite one of the goals, each player has a ball. The first player in each line dribbles towards the goal in front of them and attempts to score. The goalkeeper must prevent them. Once they have taken their chance at goal they retrieve their ball, join the back of the queue of the other group and await their next turn. This sequence then continues until the coach informs the players otherwise.

As the players are moving towards the goal they should ensure that they are;

As the attacker approaches the goal they should have already assessed the positioning of the goalkeeper and decided upon what the best technique would be to employ to score. The options they have include;

The second player in each line begins once the goalkeeper has regained their starting position. 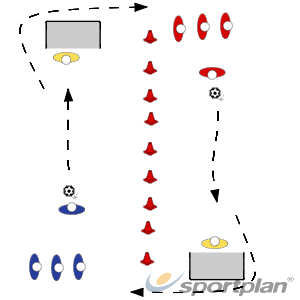