Players are divided equally throughout the four cones

Two players go at once - eventually four go at once.

-step over
-scissors
-outside cut
-inside cut
-maradona
-pull push

Making sure the player does it at the right distance 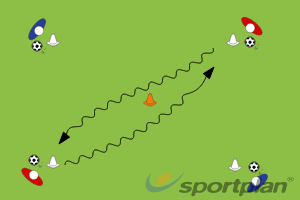 1 v 1 Passing Grid with Through Balls

Drag and Push to Beat Defender