Attackers stand on markers waiting for halfback at halfway to pass. three defenders stay inside the two markers until ball is passed and defend the four players (two hand tag).

The attacking line has four opportunities to score against the same three defenders.

Mismatch is identified. We have an overlap let us attack.

1. Draw and pass/ if you see space attack it and score.

2. Support hold depth to give yourself time with your decision.

2. Don't be afraid to cut a line if your defender over commits.

2. If you see your teammate attacking space/defender shoot to support inside and outside.

- Defenders stay inside the two markers to start and apply pressure with a two hand tag.

- One hand tag gets played through

- Defenders turn around and start in between markers closest to the halfback to start again.

- high work rate to get inbetween the markers to start again. 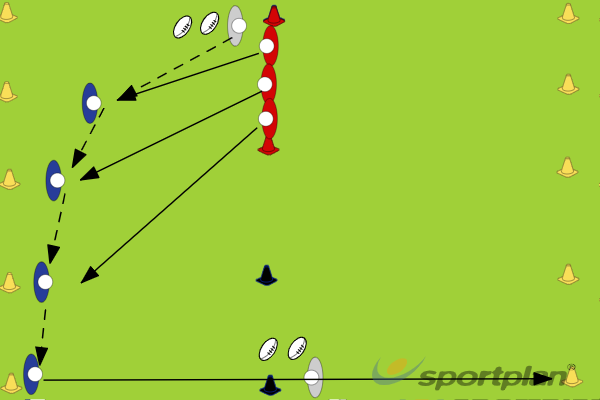 Five In, Two Out Touch

Four In, Three Out Touch