One ball carried by chaser, when player touch other players they sit down. 30 sec then change chaser.

Chaser must try to touch as many players as possible. Other players must dodge the chaser. Touched player has to sit down.

Use tags instead of a ball. Chaser must tag other players while the try to evade the chaser. Tagged player must stand still with arms spread out to side (Scarecrow)

Players out of play can be brought back in to play by team mates as follows. While sitting team mate must stand in front of seated player with opened legs, seated player must crawl trough the legs. Or by running two times around the scarecrow player. 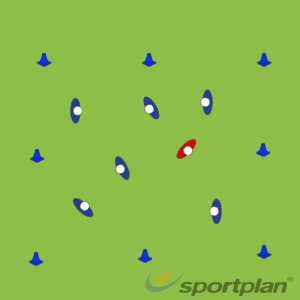