Where possible try to hold the ball in both hands, using the fingers to control the ball.

Keep the ball held at chest height, then change the running angle to slide between an opponent and a teammate who is receiving the pass.

The receiver of the pass also plays an important role in the execution of the switch, as they need to make themselves available.

They also need to keep an eye on the ball carrier, and the opponents positioning. Then as a teammate makes the pass accelerate on to it.

The passer needs to turn so that they have their back to their opponent, hiding the ball, then throw the ball softly up in front of the receiver.

The receiver should be able to catch the ball at chest height without breaking their running stride.

After passing the ball the passer should support the receiver.

To make a good pass players have to be accurate, judge the weight needed, and send the ball at the correct height.

Failing to meet just one of these aspects will probably result in the receiver having to slow their run or not catching the ball at all. 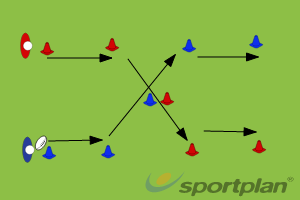