10 lines up as normal

Full back and open side winger are wide and deep

Scrum Half to fly half - Flyhalf runs straight at opposing fly half.

blind side wing rungs an arcing line initially heading open then strightening up.

Full back and openside run striaght, ensuring they remain behind the blindside winger.

Fly half looks at the defense, a good starting point is to look at the outside center.

If the defensive outside center turns in to defend the short ball then the pass goes behind the centers to the blind side winger.

If the defensive outside center turns out to defend wide, the pass goes short to either attacking center.

Flyhalf must run straight as possible.

Centers need to do the out to in line

Blindside wing should ensure he striaghtens up and does not drift too wide.

blind side needs to be deep enough for fly half to clearly see him.

both centers and winger must expect the ball every time.

if either centers takes it other center and flyhalf are support. 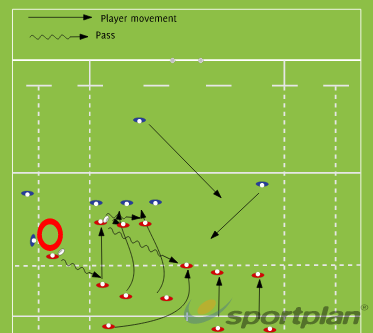