Set up with scrum half on a cone and two players waiting for pass in attacking formation within marked grid.

On command scrum half passes to first player in line. Defenders run to coloured cone indicated.

Attacking players must create space in reaction to defenders positioning. Player who was playing SH position provides the support and attacks space that is available

Make sure players draw the defenders 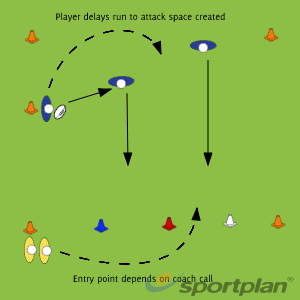