· In a grid an attacker (A) begins at one end and a defender (D)
begins in the middle opposite.
· (A) carries with the ball
· Grid should be relevant to the defenders normal position in a
game. i.e. a prop should work in a smaller grid as they often
defend in a smaller area (e.g. next to a ruck) compared to a
winger who would have more area to defend
· Attacker should accelerate quickly to cross gain line
· Defender can only move laterally
· Attacker should attempt to fix the defender, forcing defender to
make the tag from the side or behind
· Attacker should vary his/her starting position 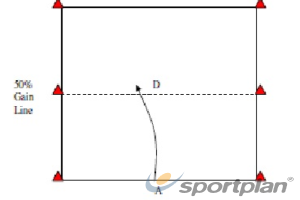