Players (A) form a circle approximately 1m apart from each other.

The players pass the ball around the circle until the coach calls change, then the players should change the direction they are passing.

Teams compete against other circles to get as many passes in a set time.

Increase the distance between the players.

Get a player to run a lap around the outside of the circle while
the passers try to pass the ball around the circle and beat the
runner back.

Make the passers throw a cut out pass then a pass back inside.

So cut one, then back one, cut one, back one etc. 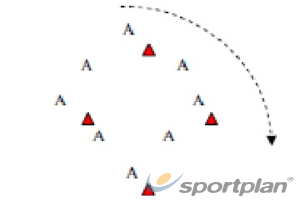