For an even number of players. Normal footwork rules apply:

Players line up through the middle of the court evenly spread out down the full length facing the sideline (so their backs are up against the back of their opponent).

Race starts by player 1 (on the base line) passing to player 2 who is on a hard lead toward the side line. At this time player 1 should of lead to the sideline to put themself in position for the return leg.

From here the run gets reversed (Players lead to the centre of the court).

If a pass is dropped the player who drops the ball must retrieve the ball & return to their position prior to their next pass.

Game is won when a team successfully pass up & down the court 5 times.

Be on the look out for any footwork violations, If a step occures take the ball back one position.

Reward: Winning team gets to have a drink/rest & watch the losing team run a sprint drill.

This drill teaches the players the importance of staying calm under pressure, leading hard & accurate passing. It also has the addor (hidden) benefit of increasing the stamina & fitness as they are not thinking abouyt the running more so the winning of the game. 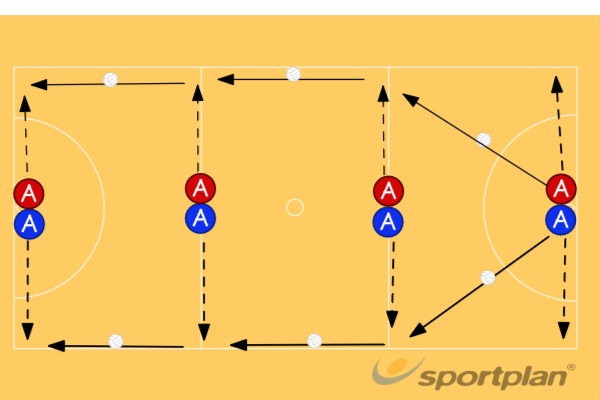 Around the 3ft mark

Around the cone - meet the pass

Around the cone - meet the pass Progression

Chest pass on the move