Play in 1 third or half court. Have 2 hoops one at each end of the boundary they will be the goals and 2 cones 1 at each end of the boundary but opposite side to that teams goal. Each team will line up on either side of the court the couch will call out 2 or more numbers, the players will listen for their number and when it is called they will then run around their cone and onto the court.

The first person who reaches the ball will start the game. Netball rules, both teams will try to pass the ball to the hoop and place the ball inside to score a point.

After each point scored the players will then run back to the side lines and then the couch will call out another set of numbers. 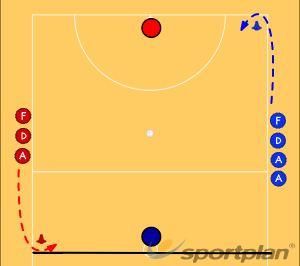