WA runs one way, stops abruptly and changes direction before again changing direction for a second time to go and meet the pass.

WA runs one way, stops quickly - changes direction and runs into space to meet the pass.

WA runs and stops, making it look as though they are going to cut back before continuing their run in the direction they were already running to meet the pass.

Every time they run the attacker should be thinking of what they can do to wrong foot their marker - always varying their tactics so that they don't become predictable.

Player 1 turns their back to players 2 and 3 and receives the ball from X.

On receiving the ball player 1 pivots.

Players 2 and 3 both make strong sideways movements, but only 1 of them calls for the ball. Player 1 passes to this player.

Ensure players 2 and 3 communicate before each repetition so they know which of them will call for the ball each time (this can be done with hand gestures to avoid player 1 overhearing!)

SPLITTING THE CIRCLE. (SETTING UP TRIANGLES) 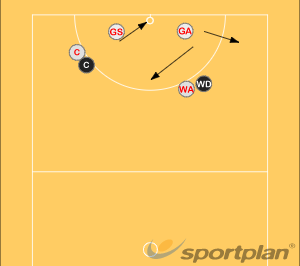