Point 1 is where a player shifts the ball around the D, runs into the D and receives the ball back from his team-mate near the top of the D before taking a shot.

Point 2 is a run through flatter beacons (not pointy cones). The cones are placed randomly in a group with small gaps between, prompting the player to look for a route through, and to be able to control a bouncing ball.

Point 3 is a traditional weave between the cones.

At the end of each point, a shot is taken on goal.

Promote a reward for those who hit on target, or a "penalty" for those who miss the target. Scores per player can be kept to make it a competition.

Players progress from left to right, station to station.

Make sure players at the final station on the right don't run across the front of the drill to the cone on the left, but rather behind all the stations. 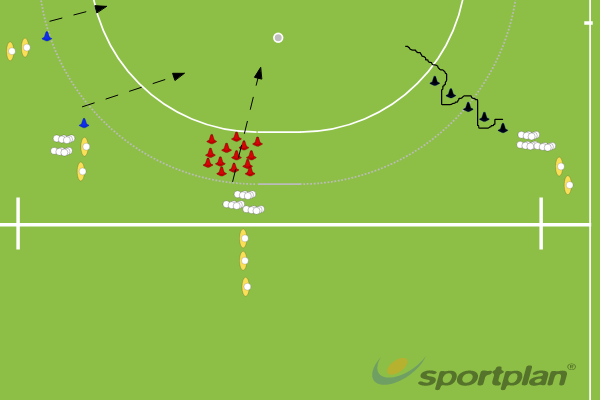 Back out to the top

Changing the Point of Attack

Changing the point of attack

Crossing - From the Left and Right