One team starts receiving the ball and attacking for a set period of time (5 minutes), the other team defending.
Teams start in opposite corners. Attacking team (X) sends 1 player into zone, who receives a pass from the Coach (with balls on sideline). X receives the ball and tries to attack the opponents’ goal.
Defending team sends 2 players out (so it is a 1-on-2 situation), who try to dispossess player X and counter attack to goal. Play this ball until it either goes in goal or out of play. At this point, players clear the zone.
Next, 2 X’s enter the zone, receive a pass, and O’s again send in 2 defenders (a 2-on-2 situation). Play this ball out in the same manner. Once ball is out of play, players clear zone.
Next, 3 X’s enter the zone, and again 2 O’s (3-on-2). Play out and clear zone.
After the 3-on-2, X’s go back to sending 1 player (1-on-2).
Play for 5 minutes and switch sides, so O’s are attacking, X’s defending.

Players should learn to recognize numbers-up, even and numbers-down situations and adjust play accordingly. Recognize that losing the ball creates an immediate counter-attack goal scoring opportunity, so take risks with that in mind.
Identify 2-on-1 situations and take advantage of them to eliminate opponent, either on initial attack or on counter.
Speed of Transition: can players off the ball anticipate what is likely to happen and gain advantage in transition play? 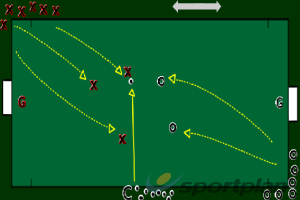