Defenders attempt to make 5 passes between each other before trying to score through the gates.

The 3 attackers hold a tight mobile striker defense(low body position, sticks and gloves) and intercept ANY passes made by defenders. Attack may NOT intercept until 3 passes have been made by Defense.

The two Defenders try to score through gates after five passes

Make sure the Attackers have great mobility, keeping the low body position with the stick down and the left hand glove down.

Make sure the passes are hard and accurate from the two defenders.

Defense has to make 5 passes before trying to score, they will have to reposition to make this happen when the attack starts pressure on the 3rd pass. 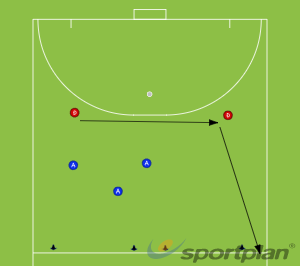 Inside out - Indoor hockey outdoors

Netball rules - 1v1 in each grid (stick to your positions)

Practice to learn the principle of the 1/2 court press

Receive in the ball in the scoring zone - Joker