Blue (outletting team) can score by direct hits into any three goals on the halfway line. Red (pressing team) need to close the direct goal lines to force the ball to the outsides.

Red try to gain possession and shoot on goal.

CF leads the press. Force ball to the outside with LW and RW pushed inside (closing passing lines to the mid-fielders).

Attempt to set up double tackles on the outsides with LW and LM.

Give pressing team areas to win the ball.

Time limits to get possession 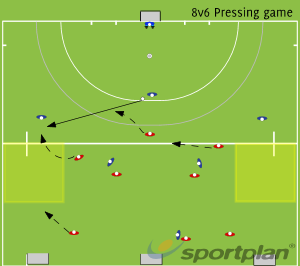