- most goals win, moves to next game, loses stay

defending player need to:
- concentrate on ball during tackle

- prior to block tackle be in basic grip

- time tackle so that its made at last moment to catch opponent off guard, looking for cues such as: when attacking player takes stick off ball/looks away from ball tries to move through line of defender 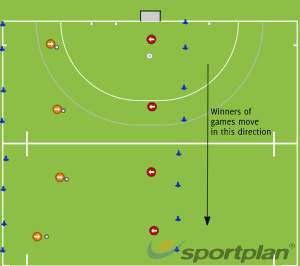