This drill is designed to help your players control their passes even when running down the court at high speeds.  If a player can make a pinpoint pass on the run, (s)he becomes a valuable asset to the team.

1. Have your players line up as shown in the diagram.  Four basketballs should be in play.

2. On the whistle, the first player in line with the ball will pass to the player on the elbow closest to him/her.  While on the run, the player will receive the pass back from the elbow.

4. The player should then rotate to the opposite sideline and start the drill again.  Players from the elbow will rotate to be a passer after roughly one minute.

5. The next player in line should start the drill as soon as the player in front of him/her has reached half court.

Continually tell your players to…

- Make the lay up with the correct hand.

Tip #1 – Make sure your elbow players are doing a good job of leading the passer as (s)he’s sprinting down the court.  Forcing a player to stop his/her forward momentum can be the difference between an easy lay up and a broken fast break.

Tip #2 – Have your elbow passers mix up the way they pass the ball to their teammate.  Throw a chest pass one time, a lob pass the next, a bounce pass the next, etc.

Tip #3 – If you have enough numbers, this could be turned into a race, the winner being the first group to finish the drill correctly (lay up made) one time through.  This will force the players to run the drill harder, thus getting some conditioning in as well. 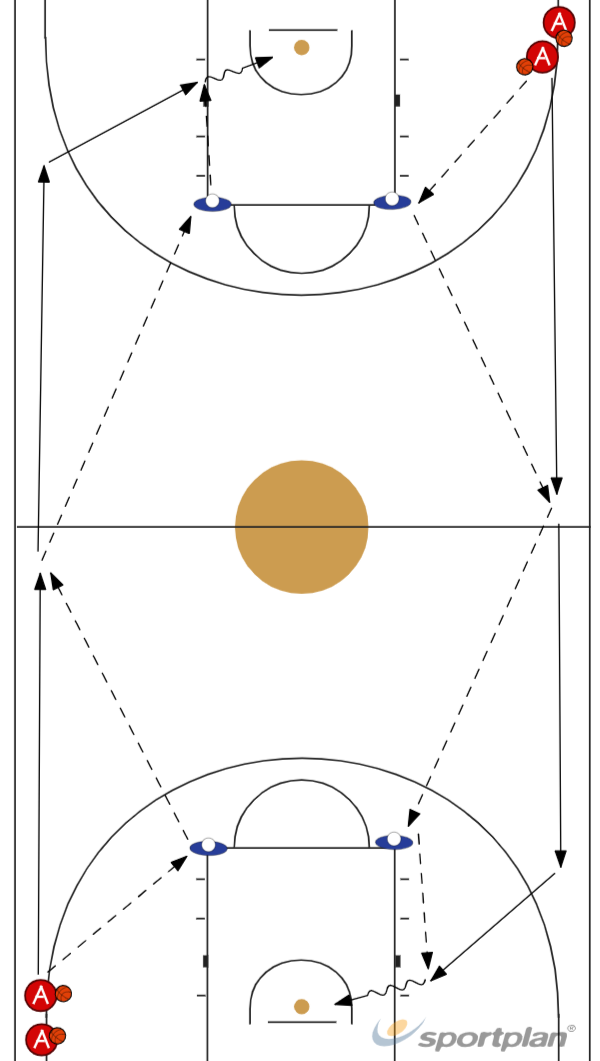 2 ball Front and Back

Drop and Catch between Legs

Drop Ball Behind Back (front)

Drop Ball Behind Back (side)

Back To Training: Tactics

See how you can use a tactical session to stay safe and improve your teams performance. Split your tactical sessions up into positional work, full team formation and set plays.
read more