Players pass the ball against the wall from two different distances.

Along the first line players are no further than half a metre away from the wall, then when players reach the end of the line they move back approximately 1 metre and continue passing against the wall in the opposite direction.

When working from close players should aim to make lots of quick, little touches on the ball as they move along the line.

When passing from the greater distance players should be passing the ball high (and long) over the heads of the players in front of them.

This drill is designed to improve players' setting skills and should be continuous, with players circling, working on their short and longer touches. 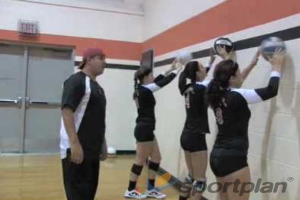 Basic Butterfly Setup Variation with Players / Coaches on a Box

How to Pass or Bump a Volleyball